The Average Net Worth By Age in Canada in May 2022

And, while this has been going on, reliable Canadian companies, Canadian recession proof stocks essentially, are being cast aside for more lucrative returns.

However, there is no questioning the fact that these stocks are vital to any investors portfolio, regardless of whether or not the market is ignoring them.

Because as we saw at the start of 2021 with a major growth correction, growth stocks are prone to wild swings in price.

And if you didn't hold any safe, reliable Canadian stocks, which many people new to buying stocks failed to include in their portfolio, you may have faced significantly more volatility than you're used to.

So with that being said, we found it would be quite useful to present 2 Canadian recession proof stocks, ones you can simply set and forget and focus on earning more with other portions of your portfolio.

2 Canadian recession proof stocks to add to your portfolio today

Currently, the stock sports a beta of 0.1, which suggests that when the TSX moves 1% in either direction, Fortis will only move 0.1%.

Now, this is a good thing in a down market, but also a poor thing in a rising market, because beta works both ways. However, this is a stock you're going to be thanking when the markets take a tumble in a recessionary environment. Why?

Simply put, it is a company that owns the means of power generation, the poles, the conductors and even the meter box on your home. From there, it will negotiate with the municipality and come to a decision on a rate that is not only comfortable for you, the customer, but also guarantees a profit for the utility company.

And, because a regulated utility company owns the method of getting electricity to your home, a competitor can't step in and take market share.

Simply put, this is one of the safest stocks in the country to own today. During a recession, your electricity is going to be one of the last things you shut off. Sure, you may pinch some pennies when it comes to eating out or going to the movies.

But, you're definitely not cutting off the ability to turn your lights on just to save a few bucks.

This is exactly why the company has a 47 year dividend growth streak, and plans to continue to grow that dividend at a 6% pace over the next 4 years.

With operations in Canada, the United States and Caribbean, Fortis is exposed to multiple economies and currencies as well.

Fortis was one of the first stocks I bought. And, it's also a stock I rarely look at inside of my portfolio. In fact, I treat it more like fixed income than anything.

It's also provided excellent overall returns for Canadians over the past 10 year time period. Lets have a look at its chart 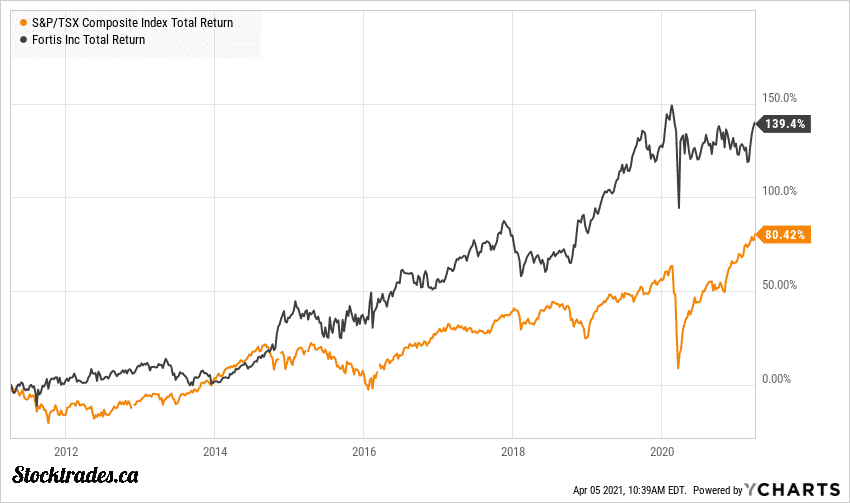 Now, you may have a look at Dollarama (TSE:DOL) and think wow, this is a company that actually struggled in 2020, why is he labelling this a recession proof stock?

In fact, there were very little businesses here in Canada that were not impacted in some form by the COVID-19 shutdowns.

However, a global pandemic is something I see to be an exception, not the norm. While recessions are something we're going to face at pretty regular intervals because of the economic cycle.

Dollarama sells discounted goods to Canadians at over 1000 locations across the country. In fact, the company has some lofty goals over the next 10 years. It has stated it plans to expand to over 2000 locations by 2031.

The company is the leading dollar store operator here in Canada, and it's not even close.

In fact, the company has 2.6 times more stores than all it's competitors in the country combined, and the company is nearly 6 times the size as its second largest competitor Dollar Tree.

Now that we understand how dominant Dollarama is in terms of size and market share, we can spin back to the recession proof thesis.

If people's wallets are full and the economy is booming, they may not mind spending a few extra bucks to get an expensive birthday card, cleaning supplies or even food.

But, when times get tough, spending like this is often the first thing that is slashed, and they instead go to a store like Dollarama to buy goods for significantly cheaper than they could at even a place like Wal Mart.

Dollarama's revenue is something that is not going to be impacted in a recessionary environment, as its products can't really get any cheaper than they already are.

To add to its recession proof business model, Dollarama actually has somewhat of a growth aspect to it. In fact, this used to be one of the fastest growing stocks on the TSX Index.

This isn't the case anymore, but as you noticed with its rapid growth plans in terms of store expansion, the company still does have the potential to provide you with reliability, along with double digit earnings and sales growth.

The company does pay a very small dividend, but with a yield of only 0.35%, it shouldn't be looked at for income. 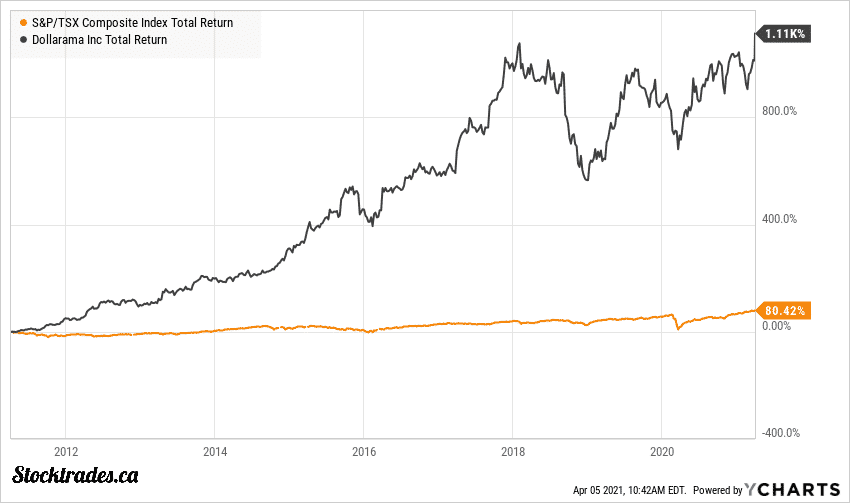 Overall, these Canadian recession proof stocks should give you a nice start on your research

These two options are some very solid stocks that should perform well in a recessionary environment. However, they aren't the only stocks here in Canada that do.

In fact, Canada is home to some companies with the largest economic moats in the world, which is why the Toronto Stock Exchange is where many investors flock for reliable income plays.

Although it's fun to chase down high potential returns, like Canadian stocks in the eSports industry for example, we need to make sure our portfolios are protected. These stocks do just that!

So, I hope you found these two stocks useful in at least kick starting your research and building a rock solid investment portfolio, one that can weather any economic environment.