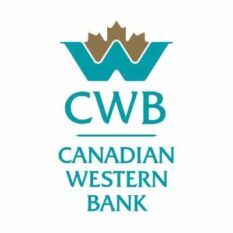 Canada’s financial sector is dominated by either the Big 5 Banks or major insurance companies. If you’re learning how to buy stocks in Canada, one of the first things you’ll often hear is “buy big banks!”

Because of this, smaller companies like Laurentian Bank, National Bank, and Canadian Western Bank are often under covered and overlooked.

The company I’m going to be looking at today is Canadian Western Bank (TSE:CWB). The financial institution is a smaller, regional play in western Canada and a lot of investors are asking two primary questions:

First, lets get started with what the company does.

What does Canadian Western Bank (TSE:CWB) do?

Canadian Western Bank is a full-service financial institution serving Canadian clients across the country, although it is primarily situated in western Canada.

In terms of percentages, here is the company’s loan exposure per province, according to its most recent investor presentation:

In terms of products, the bulk of the bank’s loans come from general commercial loans (32%), personal loans and mortgages (20%), and equipment financing (18%).

Important to note, even with the company’s strong presence in western Canada, only 1% of its portfolio, or around $300 million, is towards oil and gas production loans.

With financial companies, investors are primarily looking for a strong income stream and a steadily increasing share price. They don’t mind low to mid single digit returns in terms of stock price, as long as the company provides a strong dividend that grows consistently.

Fortunately, CWB is among the Canadian dividend stocks that offer just that. In fact, Canadian Western Bank boasts one of the best dividends in the country.

At the time of writing, Canadian Western Bank yields around 4%, and the company has the longest dividend growth streak in the financial sector by a landslide at 28 years. The next closest is insurance company Intact Financial at 15 years.

The company has also fairly consistently sported the lowest payout ratios in the sector. On a trailing 12 month basis, Canadian Western Bank’s payout ratio sits at just over 40% of earnings.

Compare this to a Big 5 institution like Scotiabank, which TTM payout ratios sit at around 80%, and we can see that although this company does yield significantly lower than a company like Scotiabank, the dividend is much safer.

Keep in mind if you’ve started to panic, I still don’t see any dividend cut in the foreseeable future from Scotiabank.

All in all, Canadian Western Bank’s dividend is safe, and I really don’t see the company making any sort of cut in the future.

However, it’s important to note that it is likely that dividend growth will stall, with the OFSI stating that major Canadian financial institutions and insurance companies need to cut back on dividend growth during the pandemic.

If we look to the chart above, we can see that Canadian Western Bank has been somewhat of a laggard in terms of share price when it comes to most of the major banks here in Canada.

It has however outperformed two major institutions here in Canada, The Bank of Nova Scotia (TSE:BNS), and CIBC (TSE:CM). Which, considering this is a small regional player, is quite impressive.

But, the economic outlook for Canadian Western Bank’s primary operating provinces is bleak, to say the least. It will be interesting to see what happens when the Canadian dividend all-star posts earnings.

We can expect provinces like British Columbia, Alberta, and Saskatchewan to be hit hard by the plummeting demand for oil, and this will likely have a material effect on their economies for at least the next half decade.

Unfortunately, 69% of the company’s loans originate from these provinces.

However, those quick to throw a blanket assumption of western Canada equals oil exposure on the company may be making a mistake. In fact, Canadian Western Bank has been reporting lower provisions for credit losses than the major banks over the last 2 decades, and more importantly during every crisis we’ve witnessed over that period.

The bank has a high quality loan portfolio, and it’s showing. So, it’s pretty easy to putt the claim that previous loans in western Canada will default. However, how will loan growth be moving forward?

It’s exposure to western province’s hasn’t hurt it thus far, that’s for sure. But, it is likely to cause slowing growth in the future.

There is no questioning the fact that economically, Alberta will be the slowest to recover out of all provinces. The province was already in a dire situation prior to COVID-19, and this pandemic is likely to cause a significant shift in spending and borrowing habits, the housing market, and new businesses.

Overall, this is a solid bank to own. If you own it right now, I wouldn’t be rushing out to sell it due to bears claiming the west and financial companies that focus on it are doomed.

But, I would expect the bank to underperform some major financial institutions that have global exposure moving forward.

Canadian Western Bank’s strong loan portfolio will keep it’s head above water. It just needs to find out how to drive revenue growth in one of the worst economic situations in the country.

11 of the Best Canadian Stocks to Buy in December 2022

6 Canadian Penny Stocks That May Take Off December 2022