The Top Silver ETFs in Canada For 2022

6 Canadian Penny Stocks That May Take off in 2022

10 of The Best Canadian Dividend Stocks to Buy in 2022

Exchange-traded funds, or ETFs for short, are one of the best investment tools that the modern investor has at their disposal. Many beginner investors simply try to learn how to buy stocks, and don't look at a more passive style of investing like ETFs.

An ETF is an investment fund that tracks a particular sector, index, commodity or basket of stocks, and can be traded on an index just like any other stock.

The beauty of ETFs is that investors can build a diversified portfolio with low investment capital. It is perfect for investors with limited capital or new investors (young and old) who want to diversify their risks and maximize gains.

While Canada has its fair share of ETFs, there are a lot of good ones south of the border as well. Canadian ETFs have one key downside. Their exposure is primarily overweight on 3 sectors due to the makeup of the index:

US ETFs on the other hand have a lot more diversity, as they have stocks in industries like tech and healthcare. In this sense, it makes sense to invest into Canadian S&P 500 ETFs.

The S&P 500 is often referred to as the default index in the United States, and in this article we're going to go over how you can gain exposure to the index via some ETFs.

The Vanguard S&P 500 Index ETF (TSE:VFV) is one of the most popular ETFs for Canadians when they look to invest in US assets.

This ETF tracks the S&P 500 Index (or any successor thereof). It invests into US companies.

One key point to keep in mind while investing into VFV is that it is NOT tied to the Canadian dollar, it is unhedged. This means that you are betting on a stronger US market and a stronger US dollar. It aims to

The top six companies that VFV invests in are:

The MER (management expense ratio) for VFV is one of the lowest around at 0.08%, or $0.80 per $1000 invested, and it is not surprising to see why this is one of the most popular investment tools for Canadians. 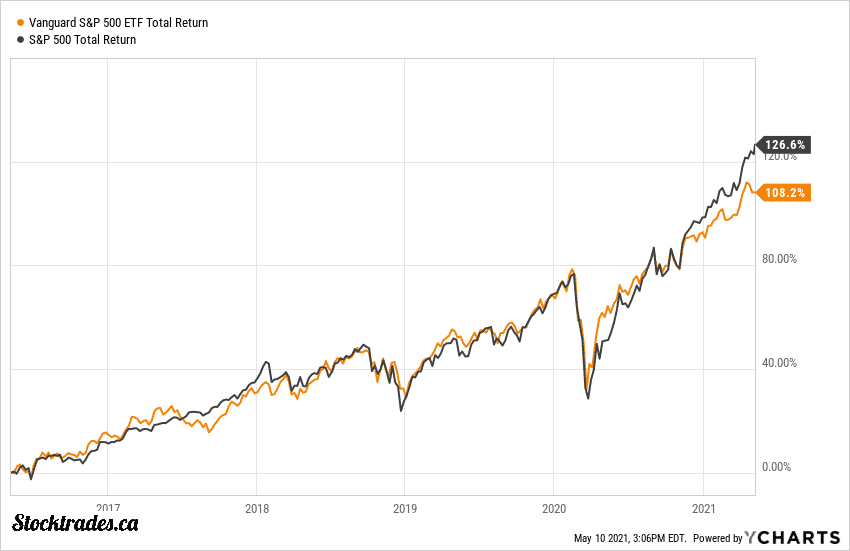 The iShares Core S&P 500 ETF (NYSE:IVV) is one of the largest ETFs around.

That’s a return of 6.94%, which might not sound very impressive. However, the ETF has delivered fabulous returns recently.

In terms of major exposure exposure, the fund has:

And its top holdings currently consist of much the same as VFV:

But, lets get back to Canadian S&P 500 index ETFs instead of ones that trade down south. 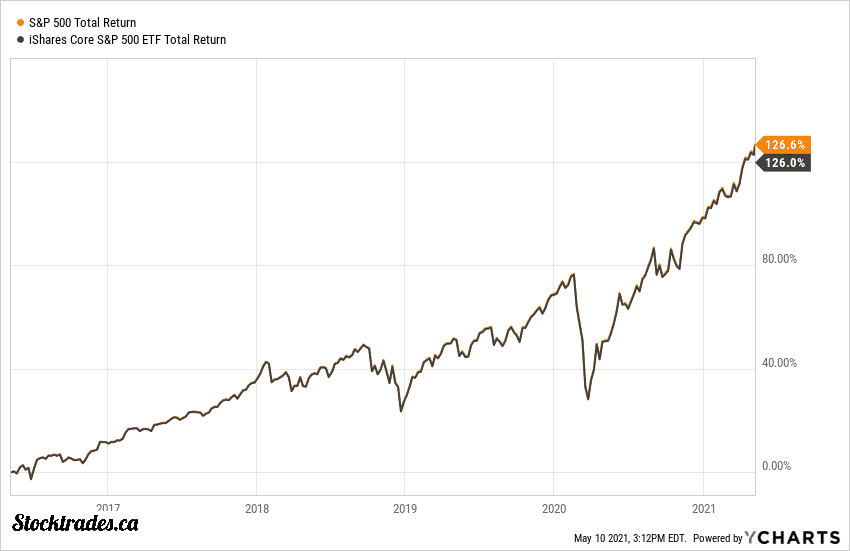 The BMO S&P 500 Index ETF (TSE:ZSP) invests in and holds the constituent securities of the S&P 500 Index in the same proportion as they are reflected in the index.

So, it's no surprise to again see the likes of Apple, Microsoft, Amazon, Facebook, Alphabet and Tesla in the top 10 holdings of this ETF.

In terms of sector exposure, the largest allocation is towards technology companies at 23.50%, followed by financial services at 14.20%.

As with the other ETFs on this list, its holdings consist of the largest and most liquid US stocks. They also benefit from currency appreciation down south, as this ETF is unhedged.

Constituent securities must pass minimum float-adjusted and liquidity screens to qualify and maintain membership in the Index. Index weights are reviewed quarterly. 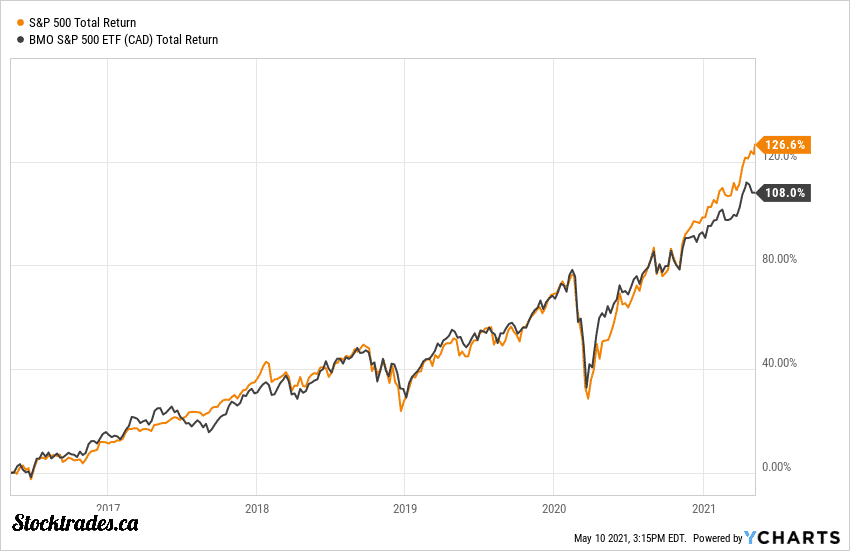 The Vanguard S&P 500 Index ETF (TSE:VSP) is the second Vanguard ETF on this list.

The  ETF is CAD hedged and seeks to track, to the extent reasonably possible and before fees and expenses, the performance of a broad US equity index that measures the investment return of large-capitalization US stocks.

Unlike the previous ETF VFV, this ETF is hedged to the Canadian dollar. Currently, this Vanguard ETF seeks to track the S&P 500 Index (CAD-hedged) (or any successor thereto).

The way this ETF gets exposure to the S&P 500 is holding the underlying US listed ETF VOO. This is exactly why when you look at VSP on something like Yahoo Finance, it has only a single holding, VOO.

Before I start sounding like a broken record in terms of holdings and allocations, VOO has much the same as any other ETF on this list.

The ETF also uses derivative instruments to seek to hedge the US dollar exposure of the securities included in the S&P 500 Index back to the Canadian dollar. 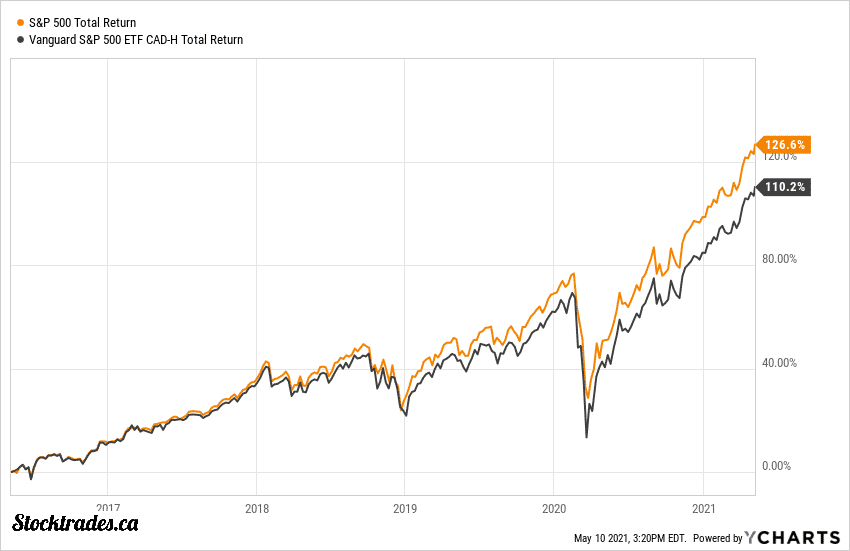 This is an outperformer on the ETF scale when it comes to Canadian S&P 500 ETFs.

Which one you choose will ultimately depend on where you see each currency heading into the future.

The performance of HXS.U directly corresponds to the performance, in US dollar terms, of the S&P 500 Index, net of expenses.

The performance of the HXS will generally, but not directly, correspond to the performance, in Canadian dollar terms, of the S&P 500 Index, net of expenses.

The difference in the performance of the CAD units in Canadian dollar terms is solely a result of the differences in daily currency rates rates used by the ETF and the Index provider to determine the net asset value and Index level respectively, in Canadian Dollar terms. 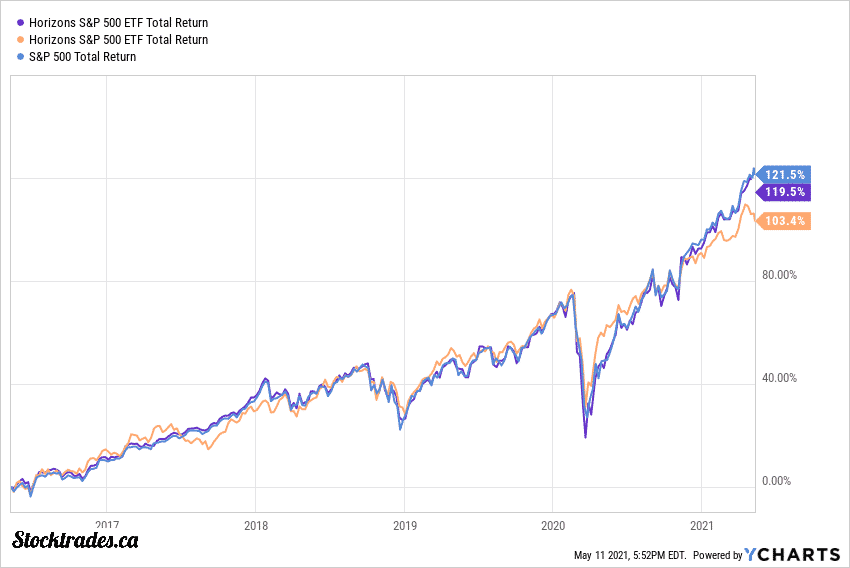 An active dividend and growth investor, Dan has been involved with the website since its inception. He is primarily a researcher and writer here at Stocktrades.ca, and his pieces have numerous mentions on the Globe and Mail, Forbes, Winnipeg Free Press, and other high authority financial websites. He has become an authority figure in the Canadian finance niche, primarily due to his attention to detail and overall dedication to achieving the highest returns on his investments. Investing on his own since he was 19 years old, Dan has compiled the experience and knowledge needed to be successful in the world of self-directed investing, and is always happy to bring that knowledge to Stocktrades.ca readers and any other publications that give him the opportunity to write. He has completed the Canadian Securities Course, manages his TFSA, RRSPs and a LIRA at Qtrade, and has compiled a real estate portfolio of his primary residence and 2 rental properties, all before his 30th birthday.