The 5 Best Canadian Bank Stocks to Buy in July 2021

What Are Dividends? the Ultimate Guide to Dividend Investing

There's no questioning the fact that as a population we're moving towards cleaner, greener forms of energy. Fossil fuels will be a thing of the past, and the world will benefit immensely from it.

How long will it take before Canadian renewable companies dominate the energy scene? It's difficult to say. But if I were to guess, not long at all. That's why you need to have a look at these Canadian stocks before it's too late.

The effects of fossil fuels on the climate and climate change in general is an extremely touchy subject, and arguments from both sides tend to pack a sizable punch in terms of support. Plus, much like Canadian gold stocks, fossil fuel companies rely heavily on a commodity and can be quite cyclical.

But all while this is happening, green energy companies here in Canada are quietly amassing large asset bases and production capacities. It's an investment gold mine.

Your best bet as an investor is to funnel out the noise and instead take a position in a strong TSX listed renewable energy stock.

Because it's a matter of when, not if these companies take over as the primary method of energy generation. And while people sit on the sidelines, squabbling over if swapping to renewables is worth it, you can be making boatloads of money off of it.

Don't believe me? These clean energy companies have crushed the returns of the TSX Index.

So if you're new to buying stocks here in Canada, you may want to know what exactly these Canadian renewable energy companies do?

What exactly do Canadian renewable energy companies do?

Renewable energy is defined as such:

"energy from natural resources that can be naturally replenished within a human lifespan." - Natural Resources Canada

Renewable energy companies provide sources of power that are often considered cleaner and more sustainable. How about some examples of renewable power?

Renewable energy provides nearly 20% of Canada's energy supply, with hydroelectricity accounting for over half of that.

A common misconception, renewable companies aren't the new kids on the block. They have been around for quite some time now, and as a result clean energy stocks provide stable and reliable cash flows, much like regulated utility giants Fortis, Canadian Utilities and Emera.

Clean energy companies are able to provide strong dividends to go along with upside potential in an ever growing industry.

Let’s take a closer look at four renewable energy companies we think are the cream of the crop here in Canada for 2021.

As requested by many readers, we've also added a solar energy company to the list in this most recent update. Solar stocks in Canada have been around for a while, but have remained relatively unknown due to high costs, and investors are starting to gain interest

What are the best Canadian renewable energy stocks?

One of the primary reasons we've never included a Canadian solar company on this list of renewable energy stocks is the fact that the best of the best trades down south on the NASDAQ. However, due to increasing demand we figure we'd start talking about Canadian Solar Inc (NASDAQ:CSIQ).

Solar stocks in general have surged as of late, but since its lows in March 2020 Canadian Solar has shot up over 97%.

The stock has dipped significantly from all time highs however as renewable energy companies have gone through a significant correction. But, there is still a bullish attitude.

We think investors, and analysts for that matter, are finally starting to see the potential in the once small cap Canadian (but U.S. traded) company.

Canadian Solar benefits from a fairly low cost of production and has a decent amount of projects planned for the future.

Initially, solar power faced a lot of criticism. Production costs were extremely high, and it wasn't looked at as a permanent solution to dirtier forms of power.

But the fact is, we wouldn't even need to capture one-hundredth of a percent of the energy hitting the earth in a year to be able to scrap every other form of energy generation. And as costs of production come down, it's becoming a more feasible clean energy generation method.

Canadian Solar has been a very frustrating stock for those buying it as a value investment.

But interestingly enough, even with a 97% run up, Canadian Solar is still fairly valued considering the future of solar energy.

Trading at only 0.38 times 2021 expected sales and 12.81 times 2021 expected earnings, valuations are not outrageous. The company has been fairly inconsistent with its growth, which is why the market isn't really willing to pay a high earnings multiple. But again, most of its inconsistencies have been as a result of what we've stated above.

Keep in mind however, this is the only renewable energy stock on this list that doesn't currently pay a dividend, and we would classify this stock as the highest risk of the bunch as well.

CSIQ 5 year performance vs the NASDAQ:

Northland Power (TSX:NPI) is a pure play renewable energy company, and one that has been in business for a long period of time. The company was established in 1987, and operates nearly 2,700 MW of electricity

Northland has witnessed some incredible growth in terms of earnings over the last 3 years with a compound annual growth rate (CAGR) of 31%. The company has also managed to more than double revenue since 2015.

The bulk of the company's renewable operations are located in Eastern Canada.

In fact, the farthest the company reaches out west are two facilities in Saskatchewan - its Spy Hill facility with 86 MW of production and its North Battleford facility, with 260 MW of production. Both of these facilities generate power by burning natural gas and full contracts are established until 2036 and 2033 respectively.

The company has a total of 27 assets, 2 of which we've already talked about. With 19 facilities in the province, Northland has a high percentage of its assets in Ontario. Quebec has 2 wind farms, while the Netherlands and Germany have one wind farm each, Netherlands being offshore.

The renewable company closed on its acquisition of EBSA back in September of 2019, a Colombian regulated utility company for around $1.05 billion. EBSA serves nearly half a million customers, and its revenue is highly regulated, thus highly reliable. It also provides Northland Power with strong revenue outside of North America.

In terms of performance, Northland Power, at least over the last year and a half, has not disappointed. Much like the other renewable energy companies on this list, it has been hit hard by a correction in early to mid 2021, but it's still a very strong long term option.

The company currently has a yield of 2.99% and a payout ratio in terms of earnings of 89%. This payout ratio looks high, hwoever the dividend is well covered by cash flow at 17.33%.

Northland Power's lack of dividend growth is one of the primary reasons it falls short on this list. Especially considering the company has ample room to grow it.

But, don't let that fool you, this is still a very strong renewable energy stock.

NPI.TO 5 year performance vs the TSX: 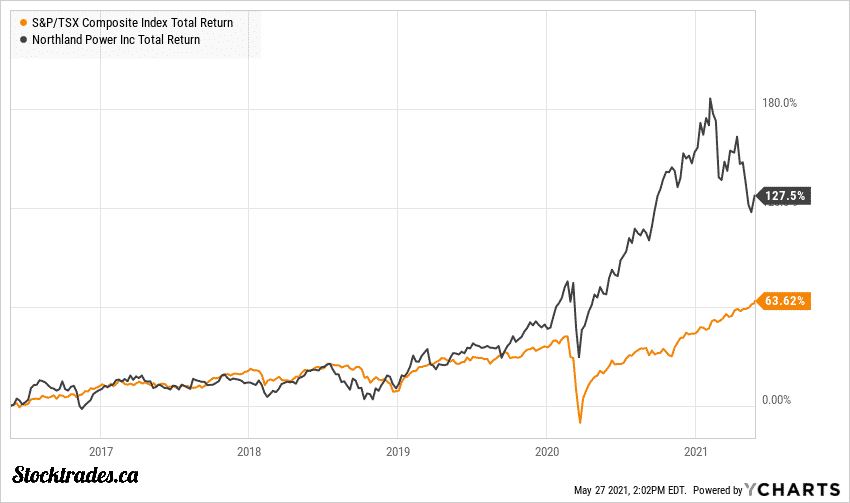 Brookfield Renewable Energy Partners (TSX:BEP.UN) is another pure-play renewable company and is one of the fastest growing by a landslide. The company is expected to grow earnings at a rate of nearly 40% over the next 5 years.

To add to this, the company is already the fastest growing pure-play renewable energy company in the country with a compound annual growth rate of 10.71%.

The company has over 21,000 MW of capacity and just shy of 6000 facilities in North America, Europe, Asia and South America. The company's goal is to deliver shareholders annual returns in the 12-15% range. Thus far, it has more than accomplished its objective.

The company's portfolio consists of wind, solar, storage facilities and distributed generation and most importantly, hydroelectric, which makes up over 75% of its portfolio.

Back in March of 2020, the company entered an agreement to buy Terraform Energy in an all stock deal. This purchase made Brookfield Renewable Partners the biggest pure-play renewable energy company in the world.

The company pays a generous dividend of 3.14% and the dividend accounts for only 80%~ of funds from operations.

Management has stated they want its dividend to grow by 5-9% annually over the next 5 years. This would be an increase over its past results, so it will be interesting to see how the company performs.

Renewable companies faced a significant correction in 2021, which will be evident in the performance chart below. In our eyes, all this has done has made Brookfield Renewables more attractive.

In our last update of this piece, we had stated that valuation was one of the main reasons it was number 3 on this list. Well, we've bumped it up to number 2 now due to its recent correction.

The company also set up a Canadian corporation, BEPC, to be the "equivalent" to the partnership BEP.UN. This is primarily a tax consideration, one that you'll need to figure out on your own which one is best for you. 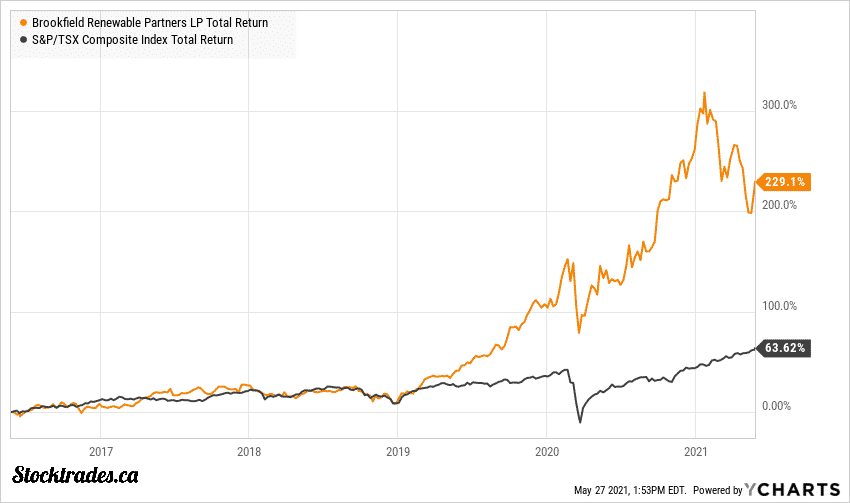 The company is engaged in the generation of clean energy through its portfolio of long term contracted wind, solar and hydroelectric generating facilities representing more than 1,600 megawatts (MW) of installed capacity.

There are a few things we really like about the company, but there's one thing that stands out with Algonquin, and that is its growth rates.

Algonquin is one of the fastest growing utility companies on the TSX Index. In fact, the company grew earnings by 33% in 2020, and prior to a very unfortunate one-off event in Texas that ended up costing the company $55 million, analysts expected strong growth in 2021 as well.

They've changed their tune now, and overall it will be a flat or even shrinking year for Algonquin. But, it's important to understand that this is very temporary, and we'd expect the company to get back to growth in 2022.

2021 aside, you're not going to find many utility companies on the index that provide this kind of growth, especially one that offers a rock solid dividend to go along with it.

Algonquin, at the time of writing, yields around 4.37%. In terms of earnings this works out to be a payout ratio of around 31%.

With a dividend growth streak of 10 years, the company has proven to be capable of consistently raising its dividend. In fact, Algonquin is one of the few Canadian Dividend Aristocrats that raised the dividend during the COVID-19 pandemic.

Algonquin is a top 5 holding in one of Canada's biggest utility ETFs, and pays its dividend in US dollars, providing an even more attractive proposition to Canadian investors.

AQN.TO 5 year performance vs the TSX 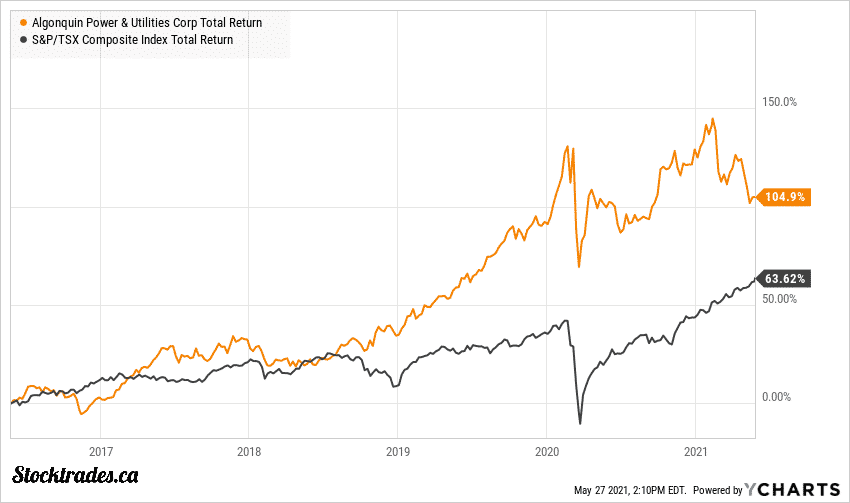 An active dividend and growth investor, Dan has been involved with the website since its inception. He is primarily a researcher and writer here at Stocktrades.ca, and his pieces have numerous mentions on the Globe and Mail, Forbes, Winnipeg Free Press, and other high authority financial websites. He has become an authority figure in the Canadian finance niche, primarily due to his attention to detail and overall dedication to achieving the highest returns on his investments. Investing on his own since he was 19 years old, Dan has compiled the experience and knowledge needed to be successful in the world of self-directed investing, and is always happy to bring that knowledge to Stocktrades.ca readers and any other publications that give him the opportunity to write. He has completed the Canadian Securities Course, manages his TFSA, RRSPs and a LIRA at Questrade, and has compiled a real estate portfolio of his primary residence and 2 rental properties, all before his 30th birthday.